From Writing & Using a Pen-Name to Censorship Sucks in six seconds flat!

I hear there are many reasons a writer will write books under pen names.  Sometimes they do it because they want to write in a different genre then what they usually write or are published in.  Others choose a pen name because they have too common of a name, or their writing in a gender bias genre.  Then there are people who write pretty controversial books and feel that publishing the novel under a fictitious name is the safest route to go.
Okay, so one of my new WIPs (work in progress) is pretty controversial, I know it will upset a good number of people I love (no it isn’t a non-fiction about anyone real).  It is completely fiction, totally made up and I have to say, pretty frickin frightening.  It is based in the future, not too far off and has to do with a collapse in the United States infrastructure.  I know, it’s vague, but I have to keep it vague, because I am only into the first chapter.
But this post is about writing under a pen-name.  So here’s my argument.  Authors write scary stuff that get people thinking, it’s like that old faithful metaphor, hitting a hornet’s nest with a baseball bat, or quite simply, when you start calling out a very powerful group  on their ideals.  Either way, controversy can equal lots of anger, especially if it makes certain powers look bad.
I think the latest novel I’m working on is going to be one that will stir the pot of all things controversial and therefore, if I am ever fortunate to have it published, I would really consider it for publication under a pen name.  I really don’t want people showing up on my doorstep with burning torches and pitchforks trying to drive me out of my community.
So these statements raise the question~ is it worth writing?  Well, my answer to that is yes.  I think we can all agree that none of us would have the guts to tell JK Rowlings not to write any of her books or if George Orwell (aka-Eric Blair) was alive today, flip him the bird and tell him to take 1984 and shove it.  Many authors from today and the past wrote because it was their passion.  They had to, it was in their blood.
Off the top of my head, To Kill a Mockingbird, Tom Sawyer, Catcher and the Rye, Huckleberry Finn, Of Mice and Men, Lord of the Flies, The Color Purple and so many more I could keep rambling off, were all books that have been banned or attempted to be banned.  Classics we all have read and loved or hated.  Books that made us think, wonder, challenge and question.  Do you get my point?
Now I’m not saying that my WIP would live in the same vicinity of these giants.  But what I do believe is I have a story to tell, just like these authors.  A story that floods my mind faster than I can write it and it just so happens that it’s going to piss off some people.  But if I don’t write it, what good is that going to do?  I have this story in my head and it’s begging to get out.  I gotta write it.
So before we decide to ban a book, burn them in the name of our children’s safety, or hate them for their content, think about the freedom we have to protest freely our distaste of these reads.  Without Freedom of Speech, we are all just a bunch of gagged critics standing around bond-fires fueled by the pages that brought us Romeo and Juliet and Winnie the Pooh.

Oh Boy did I ever go off topic!  So my post today went from writing under a pen name to harping on the uselessness of censorship in less than 6 seconds.  Oh well at least I killed two birds with one post!

Self censorship is really easy~ don't buy the book. 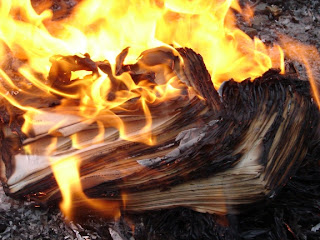